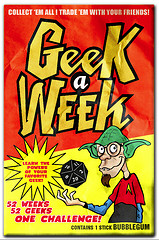 One of my favorite artists and friends, Len Peralta is doing a podcast and set of online trading cards called Geek a Week. The idea is he has a half hour conversation with someone which becomes the podcast and then he draws a trading card of them based on the conversation. So far he’s done 12 amazing cards including such geek luminaries as Jonathan Coulton, the RiffTrax crew, Veronica Belmont and Morgan Webb among several other amazing geeks.

I’m a little embarrassed to be counted among the stars, but Len saw fit to draw me up for his lucky 13th card. Len says he had a hard time drawing me, but he did an amazing job. It’s a very flattering and handsome depiction. Oh. I see what he means. It looks nothing like me. IN any case, it’s well worth a look and supporting the project if you feel like it.

You can find the card here and the writeup here.