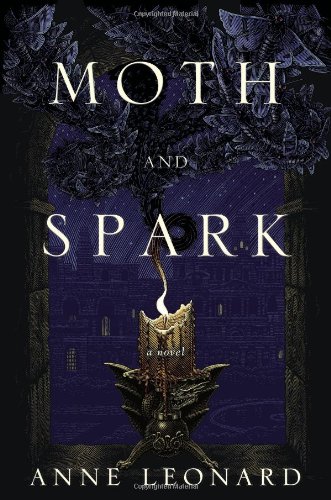 Moth and Spark: A Novel

Hey all, Moth and Spark by Anne Leonard is coming out Feb. 20 so Viking press gave us 5 copies to giveaway! The book comes out Feb. 20, so we’ll pick that day to announce a winner drawn at random from respondents to this thread.

To enter, head over to our Goodreads thread entitled “If you were a recently freed dragon, what’s the first thing you’d do?“

Listen to the show or check back in the thread on the 20th to find out who wins!

This time around we’re kicking off our February book pick, A Wizard of Earthsea, by Ursula K. Le Guin. If you’re looking for the first tale a of a boy who attends a school of wizardry, we’ve got the goods, as well as what Ms. Le Guin, who wrote her book in 1968, thinks of Ms. Rowling. Plus The Clarion Workshop deadline is looming and USC and Intel make one author’s world come alive.

Announcing the instructors for the 2014 Clarion Writers’ Workshop
SF writing competition: a world without the Normal Curve!
British science fiction book awards lurch towards gender parity
Intel Leviathan Project
This interactive chart maps out all the storylines in The Hobbit

March Poll launched, vote on what our book should be!

April will be a book picked by our Kickstarter backer Bryan Benson!

What fictional items would you decorate a room with?

Adding “lem” to the dictionary

Hi Guys,
I listened to TNT for a long time and really enjoyed Tom’s narrative about tech and the tech industry. I just returned to TNT from a short hiatus to discover that Tom is no longer there. It’s only been a couple of episodes but it doesn’t feel the same. I don’t think TNT will be the same without Tom.
Anyway…. I remembered Tom use to mention S&L from time to time on TNT and figured I’d give it a try. I downloaded and listened to my first S&L episode (#160) today and liked what I heard.
I use to submit articles in the TNT’s sub reddit from time to time. Not sure what the official way is to submit for this show but I just read a book I thought was very relevant to discuss you guys had about how Fantasy and Scifi are so tied together and how (as Tom mentioned) it even mixes into Horror sometimes.
I thought this book was really cool for just that reason. It’s got pirates it’s got sudo time travel it’s got monsters. Take a look! We had a fantastic time at the meet-up at Borderlands Books in San Francisco! Luke Pebler read his Anthology story, The Same International Orange, in front of the live audience, and we had a fantastic live song from Sky Corbelli! You can listen to it below. It’s about the Dresden Files!

We all had a blast, and we hope to do more meet-ups in the future (and not just in San Francisco). Thanks again for coming!

We’ve got some awesome news about new books from Peter F. Hamilton, Richard Morgan, Joe Abercrombie and Gillian Anderson. Plus we wrap up our January book, The Einstein Intersection.

Cover art for HALF A KING by Joe Abercrombie

The role of music in Einstein Intersection

The “Party Scene” in classic Sci-FI

On your last podcast you talked about the “controversy” of picking a weirder, lesser known title like “The Einstein Intersection” over something more well known, like “Nova.” But those weird picks, informed by the personal tastes of you two, are so much more interesting than standard picks that I might come across just by googling “top Delaney novels.” The weirder picks you guys do don’t always sync up exactly with my tastes, but they’re always interesting, and they’re often something I never would have had the pleasure of coming across on my own.

I personally am loving the weird beauty of The Einstein intersection, and I thought it a good idea to let you guys know that not everyone hates the decision to sometimes go off the beaten path.

Audible is offering Sword & Laser listeners a FREE audiobook , along with a 30­day trial. Go to audiblepodcast.com/swordlaser to take advantage of this special offer!!

We are wrapped on Season 2! We shot twelve episodes over three days, so needless to say…. we are pooped. But the important thing is that we have twelve amazing Author Spotlights in the can, and we can’t wait to share them with you!

So stay tuned! Edits are going to start this week, and we should have the first episode rolling out in Feb. Remember, it’s all thanks to you wonderful Kickstarter fans, and we are eternally grateful!

We have a chance to chat with the fabulous Ian Tregillis, author of the Milkweed Triptych and Something More Than Night. He alludes to his secret ‘Clakkers” project, explains how to make an angel talk like a shamus, and reveals Gretel’s secret Reagan baby.

This video is part of our re-release of the first season of Sword and Laser videos as they exit exclusivity. This episode originally posted January 4, 2013.

It’s our first episode after New Year’s and we’re still recovering. Thank goodness Neil Gaiman, the Wertzone and Stephen Chow are here to perk us up. Plus we kick off our January book, The Einstein Intersection by Samuel R. Delany.

2014 Hugo Award Nomination Period Is Now Open
Neil Gaiman’s The Ocean at the End of the Lane named 2013 Book of the Year
The Wertzone Awards 2013
300 Years of Imaginary Space Ships: 1630-1920
What Does Sherlock Entering the Public Domain Really Mean?
Reading a Novel Alters Your Brain Connectivity — So What?
Our Flipboard Magazine is out!

Stephen Chow’s Journey to the West is delightfully insane

Proud member of the Boing Boing! network and Frogpants Studios.

This video is part of our re-release of the first season of Sword and Laser videos as they exit exclusivity. This episode originally posted December 28, 2012. We chat with Marie Brennan about her historical fiction her fictionalized history and all kinds of matters relating to anthropology, ethnography, archaeology and natural history. And dragons. Plus get a peek at how much glee she takes in chopping off hands. That and more insights coming your way in this interview with Marie Brennan.