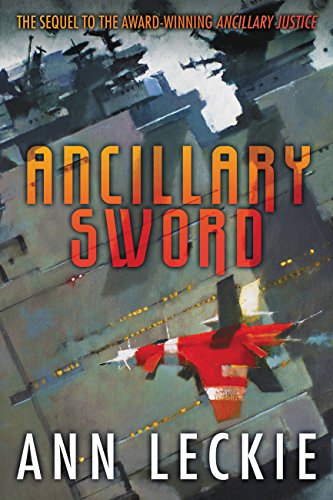 I’ve read the first part of the Imperial Radch series, Ancillary Justice, which I enjoyed very much.  It was an excellent introduction to a new world of science fiction, and an interesting arc for a series where an empire would wage a secret war against itself.  Therefore, I went into this second entry with a set of expectations about the content of this novel.  Expectations that were thoroughly thwarted by the author writing something else.

I had expected more intrigue and action.  More surprises and technological horrors that raged through the last third of Ancillary Justice.  I guess I had forgotten the first two thirds of quiet introspection and excellent world building that had proceeded all that fun. Instead, Ancillary Sword takes us to new places, but they are small intimate locations that hold none of the galactic level chess game that the end of the first novel had primed me for.

Ancillary Sword follows the same main character as Ancillary Justice.  The cybernetic former ship AI turned revenge driven walking corpse Breq takes command of a new ship at the behest of the emperor of the titular Radch.  Instead of pursuing the secret war raging at the heart of the empire, Breq decides that personal matters must be seen to, and travels to Athoek station, where the only living relative of his beloved Lieutenant Awn works as a Horticulturalist.

This is an extremely personal story for Breq.  The character is trying to come to grips with a new position while also dealing with the ongoing degradation of the empire due to the secret war.  On Athoek station this is mostly through the examination of class.

Of course, this being a continuation of the themes of Ancillary Justice, class is explored through an additional layer of what it means to be human.  Are you still a worthwhile being if you have been ordered and cataloged by the society around you?  Are you even human if you don’t speak the language of civilization?  This of course all being explored by someone who is decidedly not human.  An AI walking around in a stolen body.  It’s the best quality of the series and Leckie doesn’t let us down with her continued examination of our own society through the lens of the one she created.  The strength of her vision is evident through every carefully chosen word of the novel, continuing the thought provoking work she started in Ancillary Justice.

Even her “trick” of avoiding the naming of characters specific gender is continued here and used to great effect. The true genius of it is that you grow to simply not care who has what set of genes in their pants.  The trick is not to leave you guessing, but to reach the point where you stop guessing, because it just doesn’t matter.  Her other themes are done with the same deft hand, not getting in the way of the story, but always there and available to be found without a lot of guessing and pretentious philosophizing. It’s one of my favorite points of the series is that Leckie doesn’t just ask these questions but shows us the path her created empire takes when it tries to answer basic questions about who is human and what it takes to be human.

As impressed as I was by the quality of the writing I still felt that there were missed opportunities by staying with the small personal stories of Athoek station and not going out into the deep problems of the war inside the Imperial Radch.  I would probably have less concerns if the ideas and concerns of the war weren’t constantly being brought up in the story.  If I could have just been left to live in Athoek station I might have come to terms with the breaking of my expectations.  The story, though, constantly takes me back to all of the galactic level problems that Breq is actively avoiding and risking by going to Athoek to deal with his own personal issues.  Issues that I ultimately just found less interesting the possibilities that existed out in the warring universe that Leckie had crafted for us.

This is still an excellent extremely recommendable book, but it loses a star for me for breaking my expectations and then reminding me over and over about how broken they were.  3 out of 5. (Honestly 3.5 but goodreads don’t got half numbers 🙁 )