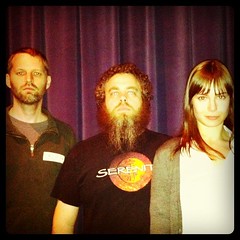 Yes my friends, we heard A Dance with Dragons by George R. R. Martin got a release date of July 12!  So we get very excited about that as well as sharing a little insight into the scents of Westeros and the Dothraki Highlands. Plus a report from the Patrick Rothfuss signing!

A Dance with Dragons will be released July 12!!!

The Game of Thrones scent pack

Rothfuss pledges to buy Firefly from Fox and give it away

LotR Rewritten From a Mordor Perspective

BARE YOUR SWORD – feedback from the audience

BOOK Check-in The Shadow of the Torturer Shadow & Claw: The First Half of ‘The Book of the New Sun’ (Book of the Long Sun)

Just listened to your podcast # 53 Shadow and Claw.

There was some discussion about whether middle earth was our world previously. And Veronica was fairly adamant about it not being our world.

A few things I have always heard. First off in The Hobbit in the very beginning Tolkien pretty much said that Hobbits were still around and that they used their “”Magic”” to escape being seen by us “”dumb clumsy humans”

Also I had always heard that Tolkien was upset about England not having it’s own mythology and that is why he wrote the Silmarillion.

Just some thoughts I had about that. Wondered what you guys thought.

Hi.
I’m a first time listener from Korea and really enjoyed the last two episodes. I always wanted to find a podcast that contains the information about SFF books. Most of the SF podcasts deal with mostly flims or games. It’s really good to have a show like sword and laser=)

Since I’m from Korea, the numbers of SFF authors I know are very limited. But I got to know some authors thanks to your show.

It’s quite hard for me to get copies of books cuz most of the books haven’t even been translated into Korean(except for the universially famous books like Harry Poter or Lord of the Ring series). So the only chance I’ve got is to get the e-book copy from the internet. The reason I brought up this matter is that it might be good to have an episode about classic SFF books you can get free on the internet(Project Gutenberg and stuff). You put some of your favourite classic novels in the episode. It would be great!=)

Anyway I really like listening to your show and keep up the good work!

Help Bini out at this thread

This podcast is brought to you by Audible.com the internet’s leading provider of audiobooks with more than 75,000 downloadable titles across all types of literature and featuring audio versions of many New York Times Best Sellers. For listeners of this podcast, Audible is offering a free audiobook, to give you a chance to try out their service. For a free audiobook of your choice go to audiblepodcast.com/sword. On Audible now: The Wise Man’s Fear by Patrick Rothfuss

Partner Sticker Fu. Use the code Sword1 and get 10% off the stickers at stickerfu.com.